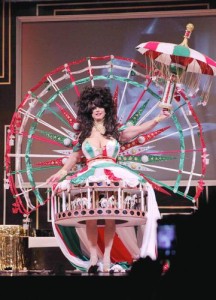 Miss Best in Show 2013 is Miss New Jersey Vava Fanculo! The six contestants danced through a difficult race with no shortage of fake nails, fake cleavage, and fake smiling. The hair pulling was real.

Under the direction of Jeffrey Drew, the contestants and dogs (chorus girls) spent months rehearsing for the big night October 6th at the Orpheum Theatre. As nearly 2,000 audience members filed in, you could feel the excitement backstage. Lashes were getting longer and corsets were getting tighter.

This year’s contestants displayed a wide variety of looks and talents ranging from opera singing to upside-down painting. Check out the photos and videos at www.bestindragshow.orgincluding the climax of the evening, Miss New Jersey’s talent.

The Best in Drag Show has raised more than $3 million for Alliance for Housing and Healing since it was founded in 2003. But the history of this event is much longer and much deeper. It started in 1989 as “The Battle for the Tiara” when Alexis Pittman and close friends joined together in a

one- bedroom West Hollywood apartment to hold a farcical beauty pageant (a la Miss America). Fundraising for Aid for AIDS, a program of Alliance for Housing and Healing, began in 1991 when Alexis collected $400 from those who had gathered for the raucous annual contest. In 2003, the event was re-christened “Best in Drag Show” and has since found a wonderful home at The Orpheum Theatre in downtown Los Angeles.

As it matured from its living-room roots, the event has maintained its kind heart – a fundraiser for those who are struggling with HIV/AIDS and poverty.

Many, many thanks to the ticket buyers, donors, sponsors, cast and crew for a successful Best in Drag Show. Every sequin made a difference!