Rick Starr Gets a Plaque on WeHo Walk of Fame

Today at 11:30, the West Hollywood Walk of Fame will grow by one, when Rick Starr’s plaque will be added to the installation. 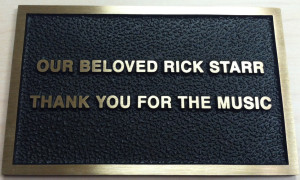 The walk is a tribute to life and a promise to those lost to continue our commitment to improve the quality of life for people living with HIV/AIDS, according to its website.

Starr died last July, according to WeHoville. He had worked at Hollywood Sheet Music for years until the store shut down in 2009.

Says WeHoville; “Starr also was known for Rick’s Picks, the shows he hosted at the Gardenia Supper Club at 7066 Santa Monica Blvd., east of La Brea, which is the longest-running cabaret supper club in the United States.”

According to a fan Facebook page, today is Starr’s birthday.

“Rick’s most earnest desire when he knew that the end was near was that he be remembered with a plaque on the West Hollywood Memorial Walk,”a Facebook post says.