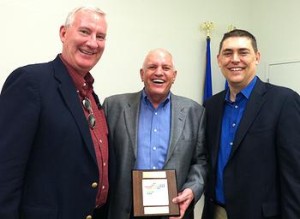 The City of West Hollywood has recognized employees and volunteers of local agencies who have done exemplary work in providing prevention, education and direct HIV/AIDS services with its the Paul Starke Warrior Awards.

Paul Starke was a former member of the West Hollywood HIV and Substance Use Services Providers Consortium and an employee of Being Alive, an organization by and for people with HIV/AIDS, who died in 2001. Starke worked in social services throughout his life, helping troubled youth, individuals with substance abuse problems and people with HIV/AIDS. He was also very involved in the medical updates sponsored by Being Alive and AIDS Project Los Angeles and the Positive Images Consortium.

Teig Keenan, Being Alive. Keenan was born in Queens, New York and has lived in New York, San Francisco and Los Angeles. He tested positive for HIV in 1985, and his participation in an AZT clinical trial began his journey to a new healthy, productive and long life. His participation in support groups in New York and San Francisco led him to Being Alive when he arrived in L.A. in 2004.

Over the past 10 years Keenan has been involved with Being Alive as a participant and volunteer. As a volunteer he has taken on many roles including filing and clerical duties, answering phones, confirming appointments and helping with the cleaning and upkeep of the Being Alive offices. Most recently, Keenan has been managing the front office and assisting with the Sculptra program.

An expert in health coverage, Monahan is a supporter of the Alliance for Housing and Healing’s efforts to provide housing to clients who are struggling with HIV/AIDS and poverty.

Schneider extended his stay at APLA as a registered intern in West Hollywood. He continues to volunteer, providing psychotherapy and facilitation for the group. Schneider also volunteers as a speaker at schools in their anti-bullying campaigns.

April Saravia, Friends Community Center, (division of Friends Research Institute). Saravia came to the United States to live with her father when she was seven years old. She grew up in New Orleans, and while living there she felt different, growing up as a boy, and she discovered that she was a woman. She knew she had to leave New Orleans to become a woman.

Saravia arrived in Los Angeles in 1995 and quickly turned to doing sex work to survive, and became addicted to crystal meth. After living on the streets for seven years she found her way into the Van Ness Recovery House. After nine months of sobriety, she become an outreach worker in the TransAction program at Friends Community Center.

Saravia continues to work at Friends Research Institute as an HIV outreach educator for the TransAction program, working with transgender women at all stages of their lives. She conducts group-level skill-building interventions, individual risk-reduction counseling, HIV test counseling, and street outreach to transgender women in West Hollywood and adjacent areas.

Saravia also is active in the LOTUS group, which empowers transgender women in the community, and has served as co-chair of the Transgender Service Provider Network (TSPN). On September 21, 2013 she celebrated 7 years of continuous sobriety.

Cary Stevens, AIDS Research Alliance. Stevens, a second-generation Los Angeles native, earned his Bachelor of Arts at UCLA and his Master of Architecture at Cal Poly Pomona, graduating with honors in 1983. Since 1987, Stevens has been a partner in the architectural firm Landa Stevens Architects, which has offices in West Hollywood.

Stevens held the position of chairman of the Board of AIDS Research Alliance (ARA) from 2007 to 2013, having joined the board in 2005. He now serves as treasurer. When ARA was facing major organizational changes, due to the 2008 recession, Stevens led the change with other board members and CEO Carolyn Carlburg.

Stevens, along with his life partner Dr. Allen “Buddy” Green, also supports the Los Angeles County Museum of Art and the Museum of London.

Jackelyn Stitt. Los Angeles Gay & Lesbian Center. Jackie Stitt, RN, has provided a cutting edge medical intervention to prevent the spread of HIV for over three years, mainly to individuals in Hollywood and West Hollywood. Running the Post-Exposure Prophylaxis (PEP) program at the L.A. Gay & Lesbian Center, Stitt serves over 60 patients per month on average at one of only two L.A. County funded programs.

PEP is a leading intervention in HIV prevention – up to 80 percent effective at preventing HIV seroconversion if taken within 72 hours of exposure. Many patients using PEP services also are using drugs that can lead to risky sexual behaviors; for these patients having access to PEP is essential to prevent contracting HIV.

In addition to overseeing the process and monitoring symptoms and providing general support, Stitt also links PEP patients with other programs and services within the L.A. Gay & Lesbian Center and to outside agencies that help the patient to reduce future risk of HIV infection.

Matthew Zavala, C.I.T.Y. X1. Zavala has volunteered at C.I.T.Y. x1 events over the past year and is one of the up-and-coming leaders not just amongst his peers, but in the LGBTQ community as a whole.

Zavala’s resume begins with his volunteer work at the L.A. Gay & Lesbian Center’s Color in Common Youth Group. There he learned how to mobilize young people, organize safe sex workshops and activities, interact with the community and lead by example. The group hosted a variety of prevention activities for local at-risk youth that included field trips, trainings, community outreach and educational workshops.

Zavala caught the eye of Children’s Hospital Los Angeles, which hired him earlier this year. There he helps coordinate youth programming and was chosen to attend the United States Conference on AIDS (USCA) in New Orleans in September. Zavala is also pursuing his A.A. Degree at Los Angeles City College.