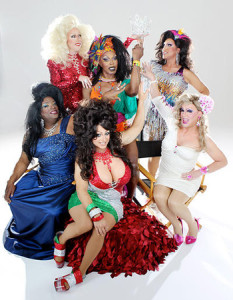 On Sunday, the battle for the tiara resumes at LA’s outrageous Best in Drag Show.

The often ridiculous, routinely offensive, always entertaining, and long-running drag competition, Best in Drag Show, pits elaborate costumes up against wicked wit. But no holds are barred when drag queens want a crown. And each year, the hair seems to get a bit bigger. The over-the-top annual event, a fundraiser for Aid For AIDS, has raised over $3 million since 2003, and the money goes to the non-profit throughout Los Angeles County to prevent homelessness and hunger for men, women, children and families with HIV/AIDS.

For its 11th anniversary event, Melanie Griffith (Working Girl), Dot Jones (Glee), Holland Taylor (Two and A Half Men), Mireille Enos (The Killing), Alan Ruck (Ferris Bueller’s Day Off), Bellamy Young (Scandal), and Kathy Kinney (The Secret Life of the American Teenager) have all joined the panel of celebrity judges.

Best in Drag Show is this Sunday, October 6, 2013 at the Orpheum Theatre in downtown Los Angeles. To purchase tickets go to BestInDragShow.org.