From HIV Plus Magazine
by David Artavia

View the Article on the the HIV Plus Magazine website 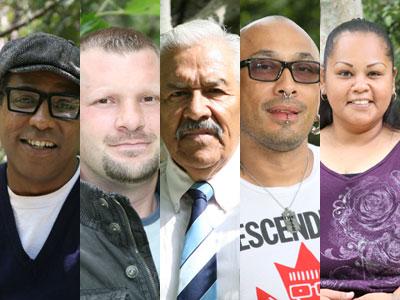 Los Angeles is literally a city of angels, say some HIV-positive folks who’ve gone from homeless to housed, thanks to the Alliance for Housing and Healing’s Community Housing Options and Independent Supported Sites program. Clients in CHOISS (pronounced “choice”) include Angelenos of all ages (and their families) who are living with symptomatic HIV and dealing with another condition, like physical or mental disability or substance abuse. They are often poor and have been homeless or unstably housed; many of them are undocumented immigrants or people of color.

CHOISS offers its clients safe housing at low or no cost, in one of the 120-plus apartments the program leases throughout Los Angeles County. The organization also provides furniture, appliances, and maintenance—something many of the clients haven’t had in years. To avoid discrimination, property managers are prohibited from screening CHOISS clients in advance.

The people behind CHOISS say stabilizing clients’ housing situation helps them stabilize their physical and mental health, stay sober, and develop the skills they need to achieve independence.

Since its 1998 founding, CHOISS has served more than 600 people, including 200 dependent children, according to the Alliance. Here are just a few of their stories. 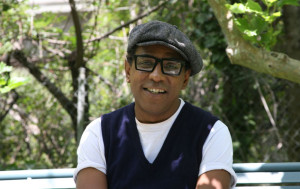 In his CHOISS apartment, Charles has found ways to express himself through painting, sculpture, and jewelry. His art is filled with cherry blossoms, blue skies, and tiny mirrors, conveying a bright happiness that stands in contrast to a past spent on the streets. Now living in Long Beach, he was a runaway teen who found himself homeless in Hollywood at 15.

At 18, Charles became a born-again Christian. He thought God could provide the comfort he had been seeking. He went back to school, served as a missionary in Mexico, and worked in one of the homeless shelters in which he used to live. But religion came with contradictions. Charles, who is gay, was haunted by teachings against homosexuality, and he could not stop thinking about hell. His relationship with God has continued to be a journey. Charles believes that God, a concept he defines as bigger than a church, loves him and accepts that he is gay.

He found his artistic side in the face of serious illness. “I was diagnosed with AIDS in 1994 and I thought I was going to die,” he says. “I still do sometimes.”

But art has helped him cope, and it gives his turbulent inner life a voice. “I want to paint beautiful monsters,” he says. “I can’t quite figure it out yet, but it has something to do with being beautiful on the inside when your outside life is such a mess.”

When he feels well enough, Charles volunteers as an art instructor at a local senior center. “But don’t call me a teacher,” he says. “The students are really good. I learn from them.” Inspired by his students and others, Charles works on his art and takes care of his health.

Murat: Sober and Loving It 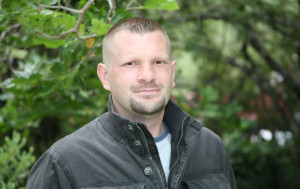 Growing up in the conservative Muslim nation of Turkey, Murat had no gay role models or any understanding of his sexuality. When he was 17, he had his first sexual experience with a man, and he thought they might be the only two people in the world who were doing this. He left Turkey for Saudi Arabia to discover a thriving underground gay scene. It wasn’t until he arrived in the United States that he understood what it meant to be out and proud.

While living in Los Angeles, his newfound freedom introduced him to crystal meth. The drug took over his life, and he eventually lost everything. For two years Murat slept on the streets and dealt drugs. After getting arrested, he had to choose between jail or rehab.

“Meth makes you care about nothing else,” Murat recalls. “Choosing rehab was the best decision I ever made.”

His quiet apartment, provided through the Alliance, has a small balcony outside his bedroom. It is the perfect refuge while he works to regain his health, and you can bet he keeps it tidy.

“I am a Virgo, so I like to be organized,” he explains.

He has now been sober for five years and is active in recovery meetings, speaking at them whenever he can. He has a new goal now: to restart his life. He is thinking of enrolling in classes in the next academic year to become an accountant. Still, he takes it one day at a time. 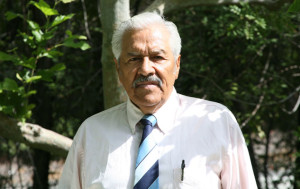 Sixty-five-year-old Jesus tears up when he talks about his apartment. In a mixture of Spanish and English, he says, “It is so beautiful. I have furniture too.” To Jesus, who’s spent years on the streets, it’s a castle.

Thirty-six years ago Jesus left his family and traveled from Mexico to California. His first job was in a McDonald’s, where he “ate too many hamburgers and wanted to be outside.”

He found construction work, but the hours were long and tensions escalated at home with his wife and two children. Jesus found himself in court trying to save his marriage and family. He lost and walked away without a job or home.

Eventually he stumbled upon a soup kitchen and stashed food in his pockets for later. Jesus spent seven years on the streets, three of those in cardboard boxes on L.A.’s famed Skid Row. He used drugs; he had sex with women, men, anyone, he says, who might help him survive. He went days without eating, causing his weight to plummet to 130 pounds and putting him close to death.

Jesus still thinks about that time when he cooks a healthy meal for himself. Lorraine, his nutritionist, has shown Jesus how to prepare dishes that help to lower cholesterol, using the grocery vouchers from Alliance for Housing and Healing. His illnesses—AIDS, syphilis, advanced glaucoma, an injured knee, high cholesterol, and mental issues—are debilitating. He takes more than 34 pills a day, sees several doctors regularly, and has had operations on his eyes.

On sunnier days, Jesus rides his bike around his neighborhood. “It is shiny, gray, and says ‘Comfortable’ on the side.… I keep it in the apartment. People tell me that a bike belongs outside, but it is a treasure. I would never leave it outside.”

The bike was a gift from his estranged wife, with whom he is now on good terms. Jesus is also in touch with his son, daughter, and 16-year-old grandson.

“The Lord gave me the chance to live when so many others died,” he says. 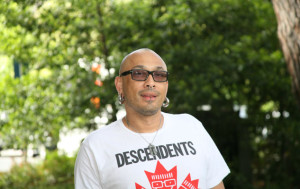 “Now that I am sober, I hunger for life,” says Johnny. In fact, when the 44-year-old can find room in his budget, he splurges on ice cream. But for the most part, he is trying to balance his cravings with healthy foods, especially the vegetables recommended by his doctors to help him tolerate medications he takes each day to keep his HIV under control.

Johnny tested positive in 1995. Like many others, he spent his youth partying a little too hard. Johnny ran with an older crowd while growing up in Los Angeles, smoking pot in junior high and dropping out of high school to travel around Europe with a boyfriend. He seems surprised that he survived when so many others succumbed to AIDS during the height of the epidemic. But he believes he is still here for a reason and wants to make his life count.

Johnny discovered Buddhism, and he maintains his sobriety by following the Eightfold Path, attending group meetings at a mediation center.

“I have worked hard to attend the meetings and be as helpful as I can,” he says. “Now I am the secretary of the group.”

For the past 13 years, Barron, his black cat, has been Johnny’s constant companion. “He is so smart,” he says. “We talk to each other all the time.” Barron is both demanding and affectionate, an attitude that also reflects Johnny’s new outlook on life. “My priority is myself,” he says. “It has to be.”

Johnny and Barron share a cozy apartment provided by Alliance for Housing and Healing in Van Nuys. Before moving into this apartment, Johnny was in the hospital and then spent time at the Tarzana Treatment Centers. But now Johnny feels safe, secure, and on the road to a better life. Erik, Johnny’s caseworker, visits once a month to keep him on track. “I don’t know if I would be the same person without Erik,” Johnny says. “He is a major part of my support system in my sobriety.”

Johnny feels like he is starting over, 20 years younger. “I am finally caring about myself. I feel like there is an inner child that I have to nourish with a positive outlook.” He likes to watch television with Barron and would love to have a job that takes him around the world again, but this time he wants to travel sober and healthy. 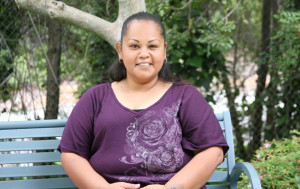 Yvonne has lived more in her 38 years than most people do in a much longer lifetime. She has eight children and is about to welcome her second grandchild. Her days revolve around those children. Cooking, cleaning, and ensuring that the kids get to school on time, Yvonne is like any busy mother. But she is living with HIV.

Before Yvonne found out she was HIV-positive in 2008, she was suffering from yeast infections and terrible coughs. Being a health professional, she knew something was wrong. She had been working in nursing homes as a medical assistant and even helped do a school-related project on pregnant women with HIV. But Yvonne didn’t think that it would ever happen to her.

“When I was in the waiting room I started praying,” she says. “As soon as I was told I had HIV I felt lost, empty. I remember going home and taking a long, hot shower…just scrubbing as hard as I could until I nearly bled because I felt dirty.”

Her diagnosis started a downward spiral. She blamed her boyfriend for the infection, and the relationship soon turned violent. For the next year, she couldn’t leave her home. She lost her job, her house, and worst of all, her children.

“I couldn’t face anyone,” Yvonne says. “I couldn’t continue normal life as it was. What else could go wrong?”

During this difficult period, she had flashbacks of physical and sexual abuse she had suffered as a child, preventing her from moving forward.

When everything seemed lost, Yvonne reached out to God for answers, and she found peace. “I knew I couldn’t do it by myself,” she says. “I needed God’s strength.” This gave Yvonne the will to take back her health—and her children.

Alliance for Housing and Healing found a stable and safe three-bedroom apartment for Yvonne and five of her children. Her favorite thing about her living space? The trees. “When I take my children for long walks and we just stare up at the leaves, it is so peaceful,” she says. “It is where God exists.”

Yvonne plans on getting her trucking license to make a good living to support her children. Life seems back to normal now—so normal, in fact, that she almost forgets she has HIV.