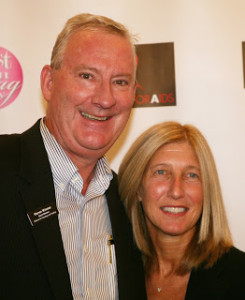 While much of the news might be about another election, we have our own election results to report. Warren Wimmer, who has served on the Board since 2003, has been elected President of the Board of Alliance for Housing and Healing. Congratulations Warren!

After more than ten years of leading the charge as President, Brenda Goodman has decided to step aside. She will remain on the Executive Committee and as an active member of the Board and valuable advisor to the staff.
​
Warren takes the reigns at a critical time. The renewal of federal funding for some of our programs is in flux and charitable foundations are seeing their giving decrease because of reduced endowment values. We are looking to explore the next phase of our program delivery by capitalizing on our core competencies and partnering with similarly minded organizations.

Challenges abound, but Warren and our entire leadership team are up to the task.

Warren graduated from the University of California at Santa Barbara in 1979 with a B.A. in Political Science. He received the M.S. in Foreign Service award at Georgetown University in 1983 with an emphasis on Energy and Natural Resources. Warren co-authored the World Bank volume, Attracting Foreign Investment in Less Developed Countries. Returning to his native California, Warren had a fifteen year career in international banking and is a Principal at the investment firm, Wimmer Associates.